By Roy Mathur, on 2012-07-02, for The Independent Daily, Mauritius (in which an edited version appeared)

This week I'll talk you through two mini-projects that can entertain you when the boss or teacher isn't looking. These projects assumes you at least know how to install software and run programs. If you can't do that yet, demand basic computer training from your employer, school, or Member of Parliament immediately. Tell them I sent you. 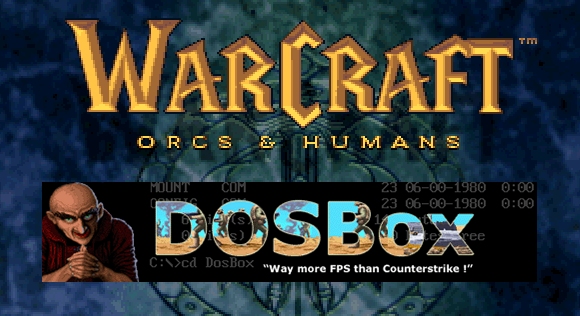 Back at the dawn of time, a small startup called Microsoft bought an operating system for peanuts from Seattle boffin Tim Paterson, renamed it MS-DOS 1.0, licenced it to IBM, and made a bucketload of money. Over a couple decades, MS-DOS became THE platform for many, many PC games. Although MS-DOS is now largely gone, there is still a large fan base for the games, some of which became huge selling classics, like Warcraft for example. The good news is that some years ago a bunch of Open Source developers very kindly created DosBox; a clever piece of software to enable people to run old MS-DOS games on modern machines.

The software we need to run this project are easily downloaded from the net, but since the set up needs some configuration and I won't have space in this column to walk you through every stage, Windows users can just download my pre-configured set up here:

Extract the files to anywhere and then run:

You'll be confronted with a strangely black screen that might be intimidating to a non Windows command line or Linux user, but no problem. Just type:

Hit the enter key and the game will start. Let the carnage begin!

Instructions of how to tweak your DOSBox settings can be found here:

And more games can be downloaded from this site:

There's absolutely no doubt that Windows is getting more and more resource hungry. Although Windows 7 is far less bloated than Vista, who knows how much Windows 8 will slow down our computers. I'm using Windows 7 Ultimate on my lowly HP netbook and, even with an extra gigabyte of RAM, sometimes things slow down to a frankly ridiculous level. I'm sure this situation is similar for many Mauritians using less than bleeding edge PCs.. It's not only a question of speed either. How many of you out there are even using legal versions of Windows? Well? Thought so. And when you got that copy of Windows from a torrent site, your friends or down at the market how easy was it to install?

One solution of both the hardware requirements of Windows and the ever increasing anti-piracy measures built into Windows is to install Linux. Such is the wealth of software available for Linux that you probably won't even miss Windows. One caveat though; Linux does not run perfectly on all hardware. One way to test Linux is to try it out without changing any of the settings on your computer. There are many ways to do this, but here is my preferred solution. You'll need small USB drive of about 1GB and a bootable USB port in your PC*. Download the Universal USB Installer:

When you have finished, you'll have a USB stick with a live version of Ubuntu Linux for you to test.

See you next week!

*If you have any trouble sorting out a bootable USB port, see:

Send suggestions or comments to roy.mathur@gmail.com