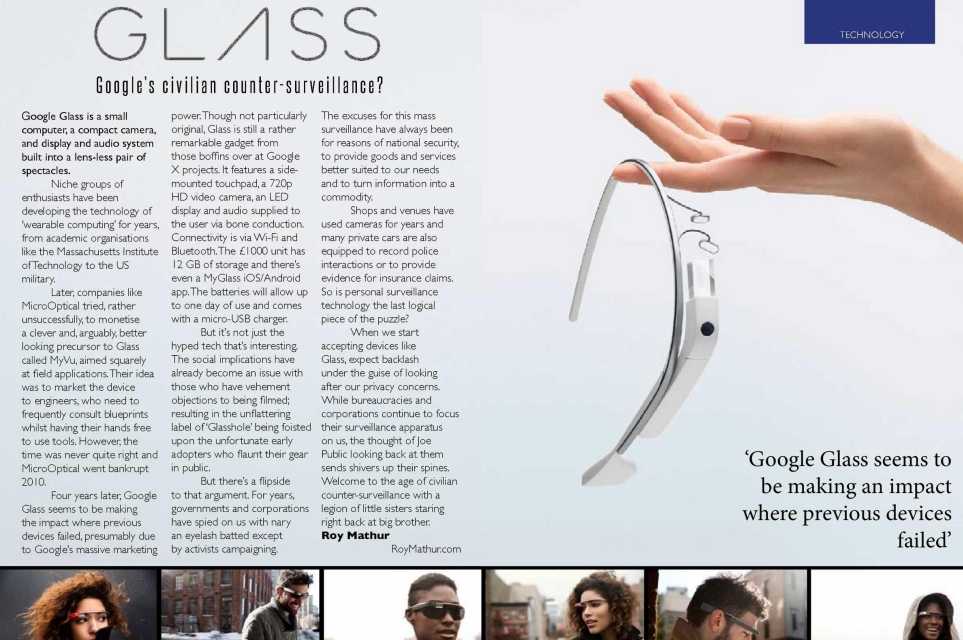 Google Glass, as a product hardly, needs and introduction; a small computer, a compact camera, display, and audio system built in to lense-less pair of spectacles.

What might not be so well known is that the idea for a head-mounted overlay display is hardly new. Wearable computing has for years had niche groups of enthusiasts developing the technology, for example, at academic institutions such as the Massachusetts Institute of Technology and the US military's Defence Advanced Research Projects Agency. Later companies like, MicroOptical tried unsuccessfully to monetize a clever and, arguably, better looking precursor to Glass called MyVu aimed at squarely at field applications. Their idea was to market the device to engineers who need to frequently consult blueprints whilst having their hands free to use tools. However, the time was never quite right and MicroOptical went bankrupt 2010.

Google Glass, though not particularly original, is still a fairly clever bit of kit. It features a side-mounted touchpad, a 720p HD video camera, an LED display and audio supplied to the user via bone-conduction.

But it's not just the hyped tech that is interesting. The social implications have already become an issue, with those whose vehement and vocal privacy objections at being filmed, have resulted in the unflattering label of 'Glasshole' foisted upon some unfortunate early adopters choosing to flaunt their gear in public.

But there is a flip-side to that argument that has not been fully considered. For years governments and corporations have spied on us with nary an eyelash batted except by activists campaigning, without much hope, to turn back the tide of technology aimed squarely at documenting our shopping habits, religious and political views and even our biology. The excuses for this mass surveillance have always been that we should submit to this scrutiny for our own good---for reasons national security, goods and services better suited to our needs, or simply to commodify our information.

But is that tide turning? Is it, in fact, possibly the most awesome example of operational blowback ever? In the light of the Snowden revelations with the leaked collateral murder video and the murder footage from Marine B's helmet camera, we increasingly see surveillance technology reflected back against those same big players.

Shops and venues have used cameras for years and many private cars are also so-equipped to record police interactions or to provide evidence in insurance claims. So isn't personal surveillance technology the last logical piece of the jigsaw puzzle?

When we start accepting devices like Glass, prepare to expect some kind of backlash under the guise of looking after our privacy concerns. While bureaucracies and corporations would like to continue to focus their surveillance apparatus on us, the thought of Joe Public looking back at them sends shivers up their collective spines. The question then will not be Quis custodiet ipsos custodes? But who doesn't? Welcome to the age of civilian counter-surveillance with a legion of little sisters staring right back at big brother.

NB/ You can intercept Roy's non-linear timeline at RoyMathur.com where he writes about his adventures through space, time, and a multitude of weird dimensions.