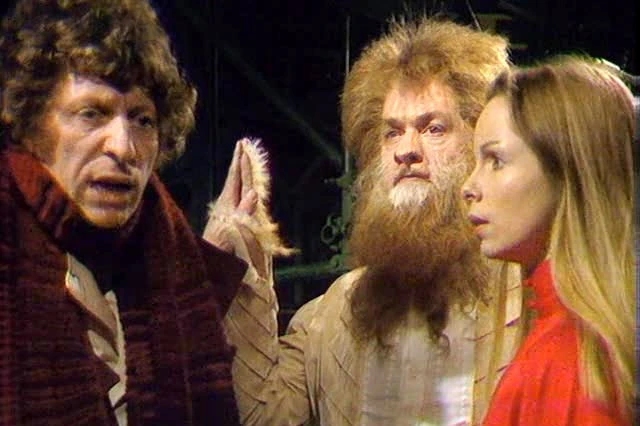 This one was a long time coming, sorry for the delay. I was ill and had technical problems too.

Today, unable to stall any longer, lest you think I have podfaded permanently, I'm taping on my Sony PCM-M10 recorder and Shure SM58 mic.

Ah, first Doctor Who of 1981, and Princess Alice, Countess of Athlone, the last of Queen Victoria's 42 grandchildren died.

There's No One Quite Like Grandma by St Winifred's School Choir was number one in the UK charts. While there really isn't anyone like one's grandmother, pass me the sickbag.

The TARDIS is trapped in the limbo between E and N space.

There, a human ship is also marooned. Their leonine Tharill navigator, a slave called Biroc, escapes and warns the Doctor. Venturing outside, K9 is damaged, and the Doctor is attacked by killer robots at a nearby ancient ruin.

The captain of the human ship, Rorvik, find the TARDIS and take Romana prisoner because she is a time sensitive psychic like their Tharil slaves, and can help them escape null space.

Adric and K9 follow. Adric hides on the ship and K9 memory wafer helps the Doctor extract information from the robot. He learns that they were built by slaves during a revolt. Seeing a robot walking through a mirror, the Doctor follows, escaping Rorvik and his crew.

Romana is rescued by a Tharill, finds Adric, and together they discover the ship is made from dwarf star alloy, the only material that can imprison the Tharills, but also dense enough to cause null space to eventually collapse, dooming them all. Romana is taken her through a gateway in a mirror where they rejoin the Doctor and Biroc. Biroc says they were once the masters, using "the winds of time" to raid planets, until the revolt.

The Doctor and Romana return to null space and are taken prisoner. Panicking, in the short time before null space collapses, the humans attempt to blast a hole through the mirrors with a big gun-like machine. It fails and explodes.

Romana and Adric help a Tharill to free the slaves.

The captain uses his ships huge engines to try and crack the mirror, resulting in an explosion that destroys the ship.

The Tharills escape through the mirror and Romana, who has formed a bond with Biroc, says she will stay and help. The Doctor gives her K9. The Doctor, told earlier he need do nothing to escape null space, says goodbye to Romana.

Even before I was knew anything about Stephen Gallagher, I read his movie novelizations; Saturn Three (1980) and Silver Dream Racer (1980). I became a fan after reading Oktober (1988). Then I read, in this order: The Boat House (1991), and Follower (1984). And there are other books and TV adaptations from this prolific author and scriptwriter, like the novel Rain (1990), which I have had on my reading list since 1990!

The Stephen Gallagher-esque-ness of the script is there from the outset. It's grimmer and different to previous adventures. There are his characteristic touches of the blue collar, the industrial and the urban. There's even "KILLROY WAS HERE" (instead of "KILLROY WOZ ERE"? BBC poshos) painted on the bulkhead, and two schlubby maintenance crew. It's all a little bit Red Dwarf.

Stephen Gallagher likes and empathises with his creatures. His previous bestiary includes wolves and a Russian Rusulka water monster, so the leonine Tharill are no surprise. Much later, C.J. Cherryh's Hani came to my mind, as did the human-lion hybrid leos of John Crowley's Beasts.

When the Doctor says, "Biroc? He's gone again. It's like talking to a Cheshire cat.", he's referring to Lewis Carroll's character from Alive in Wonderland's fading trick. Though an appropriate comparison, I can't thinking it's more to do with Salford-born Gallagher not being able to resist a Mancunian reference.

The theme of gentle leonines versus brutal humans, isn't as simple as it seems. The leonines were once enslaving kings. Who's good, who's bad? It's all a matter of history. There's something depressing about learning you're the bad guy, only after a bigger and nastier bad guy comes along. But there is also the promise of future change. Though, as we all know, we always learn from our mistakes. Bah.

Random generation using tossed coins to consult the I-Ching, the "holistic view", "Astral Jung"? There are adults for whom the script would fly stratospherically over their heads.

Null space reminded me of the big blank nothingness between places, in cult Brit author Mick Farren's far future The DNA Cowboys Trilogy, that, as I semi-reliably remember, also requires specialised navigators to traverse. If you decide to read those books, imagine a debauched sci-fi western themed party hosted by Penthouse magazine.

Here we go again with JNT's unrelenting and vicious vendetta against poor K-9. In this adventure, he's blown up and tossed like garbage, batteries so flat he's too weak to use his nose blaster, and finally left behind with Romana. You ditched him at last, JNT.

I'm always surpised at how fast the Doctor's companions find romance. To their credit, Susan, Zoe, Jo, Leela, all seemed to have really good judgement in finding excellent partners. There's also an element of the Tharills being an attractive species. Not only is Romana charmed by Biroc, whose face she strokes, but the Doctor is escorted to safety by a sexy Tharill woman.

"Dwarfstar alloy"; in which Brit sci-fi TV series have I heard that, or neutronium, which presumably is the key constituent of the fictional material? It's twanged something in my memory, but no amount of Googling has turned up anything. Let me know.

There is almost too much for four episodes, and much of the plot is spread too thinly until the last episode, and thus feels crammed. On the plus side, it is so packed with ideas and weirdness, that I got through the four episodes quickly, before I bade farewell to Romanadvoratrelundar a second time.

Stephen Gallagher wrote the novelization for this and his later script, Terminus, under his nom de plume, John Lydecker.

I have read, though can't confirm, that they were written without chapters. Hmmm.

I'm back though and not going anywhere, so keep listening and be sure to tell your friends and mortal enemies about the show.