CRRRRS 463 Doctor Who: The Keeper of Traken 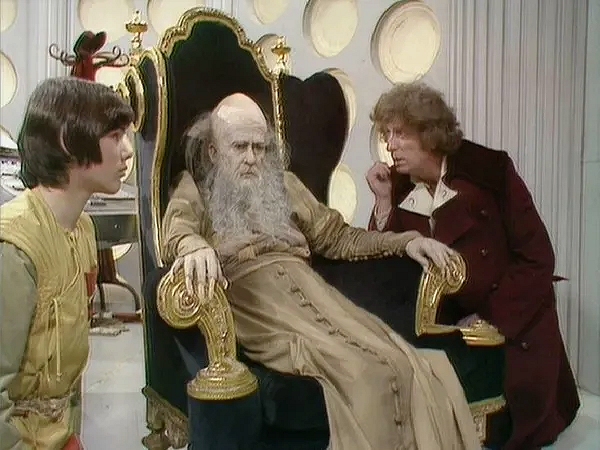 We're back to revisiting OldWho and back in N-Space too.

Sorry for the delays. I do have reasons, which would become very apparent should you teleport yourself to my home studio/office/TARDIS. Piles of bloody paper...

John Lennon's Imagine was number one in the UK charts.

True to the Tharill's word, the TARDIS escapes null space and E-Space, and returns to N-Space.

Instead of heading home to Gallifrey, where the Doctor has been summoned, the TARDIS is diverted towards the harmonious world of Traken by the ancient and frail Keeper. He wants the Doctor to investigate what he perceives to be the impending doom of his planet.

Upon arrival, the Doctor and Adric are regarded with suspicion. The suspicion deepens when the TARIS is made to disappear from the grove by the evil Melkor creature. They are later accused of murder and almost summarily executed when the Keeper vanishes, shot surreptitiously by a beam from the evil Melkor, supposedly calcified by the goodness of Traken.

Adric and Nyssa, whose father, Consul Tremas, is next in line for Keeper, do some research and find out that the murder weapon's energy type is from a TARDIS.

Kassia, Tremas's husband and Nysssa's mother, the carer of Melkur since childhood, is collared by her charge, becomes its slave, has the Doctor, Tremas, Adric, and Nyssa confined, becomes the next Keeper, but immediately vanishes and Melkur appears in her place.

The Doctor, Tremas, Adric, and Nyssa escape and try to shutdown the Source; the literal source of the Keeper's power.

The Doctor is summoned to Melkur and they disappear together. Melkur is, in fact, the Master's disguised TARDIS. The Master's body is rotting away inside his TARDIS and he is on his last regeneration. He plans to use the Source to reverse his predicament, as well as taking the Doctor's knowledge and body as his own. However, Adric and Nyssa start the shutdown process and the Master's TARDIS is severely damaged, allowing the Doctor to escape.

With the Master seemingly destroyed, the Source and new Keeper, Consul Luvic, safe, the Doctor and Adric leave. However, Tremas touches a large clock (the Master's TARDIS in yet another guise) and is paralysed. The Master exits and the two merge. The restored Master, looking like Tremas, laughs and leaves in his own TARDIS.

Bald cap aside, I liked the Keeper. Though Traken is alarmingly white, he was clearly modelled on Shouxing, god of longevity and one of the three Fulushou from Chinese mythology, with his flowing robes and long hair, beard, and fingernails. I also really liked his magnificent enormous and comfortable plush velvet wingback armchair. That is a prop I would love to own and use in my own library.

I was immediately struck at the elegant sci-fi in the style of art nouveau sets; green and lush with foliage. I also liked the soft, velvety outfits of the Traken upper crust Consul class; a black, slimmer variation the Master later adapts and adopts. Traken indeed seems like a pleasant planet.

Melkor seduces and, in a display of control and dominance foreshadowing the Master's imminent return, literally collars Kassia (Sheila Ruskin). I'm afraid I may have smirked.

The Doctor puns, "...this type's really not my forty", instead of "forte".

We are introduced to hyper intelligent, soon to be new companion, Nyssa, played by Sarah Sutton. Daughter of scientist Tremas, she can even give brainbox Adric a run for his money.

Sarah Sutton doesn't have too many post-Who acting credits, having taken time off to raise a family, but returned to OldWho for the Dimensions in Time charity minisodes and various Big Finish audio productions.

A belated happy Doctor Who Day!

The 23 of November commemorates that first broadcast back in 1963, and would have been a lovely day to podcast... had I remembered (sorry), but I hope your day was full of Who.

I have already started watching, and thoroughly enjoying, Logopolis, so expect me to report back soon.