By Roy Mathur, on 2012-11-12, for the Independent Daily, Mauritius (in which an edited version appeared) 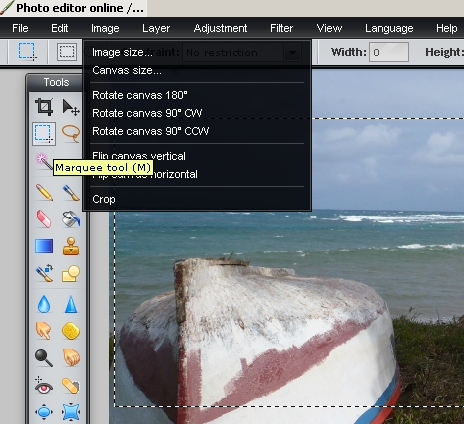 Most people are quite happy just taking snaps with their digital camera or smartphone without any further tweaking. Others will go a little further and use their devices' built-in editing software. Few, however, will attempt to use graphics manipulation software to make the most of their pictures. But who can blame them? Over the years, even graphics suites aimed at the casual user have become super complicated, but this week we'll aim to help all you avid amateur photographers make the most of your pics.

Always Start With A Great Photograph!

First things first. Go for quality rather than quantity with your pictures. In the Settings or Preferences of your camera, make sure to select the highest possible resolution and quality. Hint- newer cameras and smartphones have an HDR (High Dynamic Range) setting that you can select to automatically take a series of photographs that are cleverly analysed for the best graphical data and then rendered into a single superior final image.

Once you have taken some nice pictures and downloaded them to your PC, you can edit them to make them look even better or to optimise for use on the web or posting to Facebook or other social media.

First we need good graphics program. The industry standard software for PCs and Macs is Photoshop. While Photoshop is a great program, it is also big, complicated, very expensive and perhaps a bit of stretch to expect the casual photographer to master. For Linux users there is Gimp, which although free, also has a steep learning curve. Our solution is to find something both free and simple.

Pixlr is the answer. This fantastic program is an amazing demonstration of what can still be created using Adobe Flash. Pixlr is free and runs through any Flash-aware browser like FireFox or Chrome, so it can be used on Macs, PCs and Linux boxes without even installing anything other than Flash.

To use it, open the http://pixlr.com/editor/ web address in FireFox or Chrome. If you haven't yet installed Flash, you will now be prompted to do so. When you have finished, you may have to re-open the website address if you had to close your browser during installation. Now that you have started Pixlr, use the File menu to open your photograph in the application.

Cropping the Image: the first tweak should be the crop. Here we will judicially remove the bits that we are not interested in. Press the "M" key to select the Marquee Tool. This will enable you to draw a rectangle around the stuff you want to keep in your final image. Once you have drawn your rectangle, select Image/Crop from the menu.

Brightness and Contrast: many photographs taken with heavily automated modern digital cameras and smartphones tend to be be over-exposed. That is to say that there is too much light in the photographs making them looked washed out and bland. One simple trick is to increase the contrast and decrease the brightness. This is a simple task in Pixlr. Just select Adjustment/Brightness and Contrast from the menu and fill the text box that pops up with the following values:

Obviously, you can use any values you like, but I've found these values work well on most images.

Pixlr also has a good help system if you want to dig deeper into image manipulation, and who knows? This might mark the beginning of a new career as a world famous photographer. Or it might just help you get more "Likes" when you post your holiday snaps to Facebook or Flickr.