CRRRaSh! 426 Doctor Who: Destiny of the Daleks 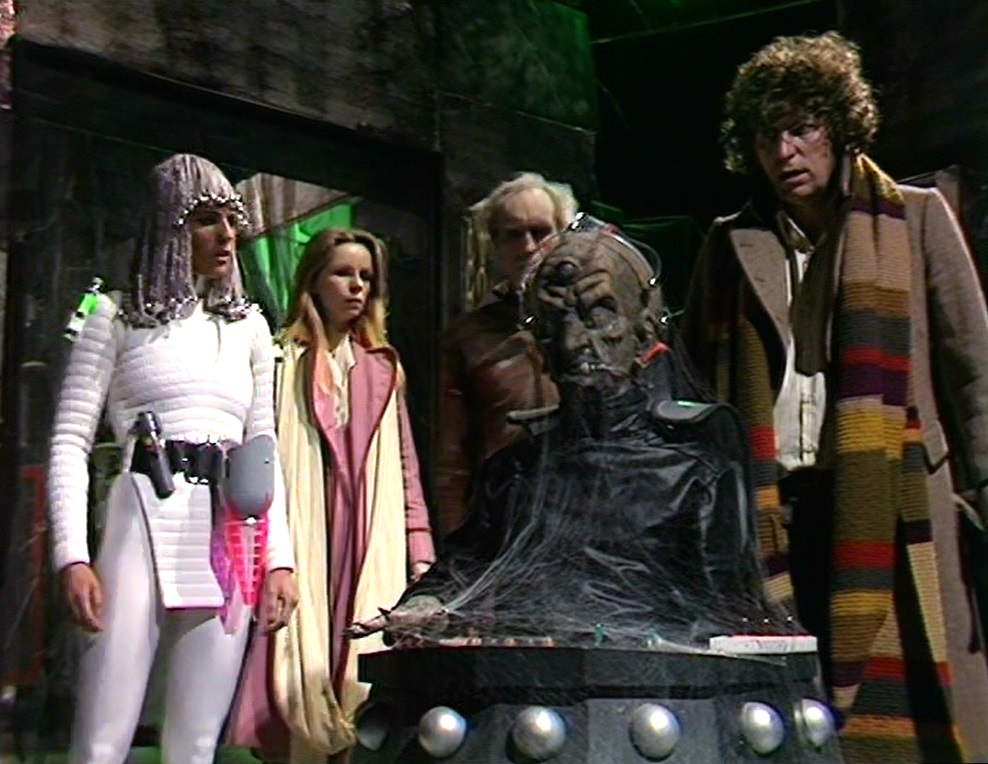 The State of the Rewatch

My right eye still itches---try doing and thinking about anything when you constantly itch---but, but, but... it's getting better! I'm not sure why, the only thing I did differently was get a bit of sun on it, then the raw bits dried, scabbed up, and started falling off. Disgusting, yes, but my poor eye is recovering. A big round of applause for Roy's eye!

More good news is that this is a new year and we're starting a new season of vintage Doctor Who, on an unscheduled day for a revisit. But it occurs to me that if I don't just do it, I never will.

Nothing in th UK, but on this day in space?

On Sep. 1, 1979, Pioneer 11 passed within 13,000 miles of Saturn's cloud tops at a velocity of 71,000 miles per hour. During the encounter, it sent back data on the planet, its rings, and its satellites, including 440 images. Based on the data, scientists learned that Saturn's atmosphere consists mostly of liquid hydrogen and confirmed that the planet had a magnetic field. Images of Saturn's moon Titan revealed an orange cloud-shrouded globe, with a global temperature of minus 315 degrees F. Pioneer 11 discovered two new moons and one new ring orbiting Saturn.---NASA

K9 loses his voice, Romana regenerates into the guise of Princess Astra from the last story. The TARDIS lands on a highly radioactive planet where they spot humanoids burying someone.

A spaceship lands, explosions drive them away, and the Doctor is trapped.

Romana finds the TARDIS buried, is frightened by stranger, falls down a shaft, and becomes slave-labour for the Daleks.

The Doctor is is rescued by futuristic looking humanoid Movellans. They tell him he is on Skaro. The stranger who frightened Romana, Starship Engineer Tyssan, is captured by the Movellans. He tells the Doctor about Romana, and they begin a rescue operation.

They head into the Dalek structure. The Doctor identifies it as Kaled and surmises that the Daleks are searching for something. They beat the Daleks to the prize, which is Davros. Davros awakens.

The Daleks arrive. The Doctor holds Davros hostage with an IED. The Daleks agree to let him and the slaves go. When the Doctor escapes he detonates the device, but Davros survives and sends his Daleks to the Movellan spaceship as suicide bombers.

Romana is captured by the Movellans. The Movellans test a nova device that can destroy a planet by igniting its atmosphere.

After tearing open the tunic of a female Movellan, the Doctor discovers what he already suspected; the Movellans are robots.

The Doctor finds out that the warring AI factions, the Daleks and Movellans, are in a stalemate due to their over-reliance on pure logic and matched military capabilities. The Movellans see the Doctor as their tactical advantage in the same way that the Daleks regard Davros.

Tyssan and the freed slaves attack Movellan ship, while Romana tackles and stops a Movellan armed with the nova device.

The Doctor confronts Davros, blinds the Dalek guard with his hat and blows it up, hits Davros's big red button and detonates the suicide bomber Daleks.

Davros is imprisoned in a small plexiglass box and frozen by the Doctor into cryogenic stasis. The spaceship leaves, taking Davros back to Earth to face justice, while the Doctor and Romana quietly depart.

As they dig out the TARDIS, the Doctor says mistakes can give you the element of surprise and help you win, and then immediately hits the wrong switch as the TARDIS dematerialises. It rematerialises for a moment, then finally departs.

Let's start with the most trivial, but highly entertaining thought: disco humanoid starship troopers! Okay, so I've got a thing for disco and Sarah Brightman's Starship Troopers is on my YouTube playlist, but look at them. Tight stretch white and silver; that look is totally disco, and a bit Gerry's Anderson's UFO SHADO Moonbase girls too; also very disco.

Their guns are very similar, but jazzed up versions of the sidearms from the Blake's 7 Liberator's armoury. At some point, to get it out of my system, I'm going to have to do a feature on Blake's 7 and Doctor Who's common cast and crew.

The regeneration trying-on-bodies scene at the beginning is funny; the belly dance is delightfully gratuitous and ridiculous. Damn it, we could have got a jingly-jangly belly dancing Romana! Oh well.

The new Lalla Ward Romana is absolutely fine, but I over the course of the revisit I've bonded with Mary Tamm's version, and it's a hard to see a new actress in the role. That is odd because my memories of the Tamm episodes, when first broadcast, are fleeting. Whereas my recollection of Lalla Ward is much clearer. The rewatch is changing me. This is Susan, Jo, Sarah, and Leela all over again. I miss them and now I miss Romana 1.

Cobwebby Davros? Disgustng, but no more so that my eye. At one point the Doctor almost blows him up with a IED, but unfortunately, the lunatic escapes and his Daleks bear the brunt...

...And, adding insult to injury, he goes on to turn his Daleks into suicide bombers and sends them off to die.

There's a scene in which the Doctor mocks the Daleks for being unable to follow up an air shaft. And yet, later we see the Dalek suicide bombers rolling over rough ground. The terrain hides their lower halves and, from their unsteady wobbling, it is clear that they are being carried. The uneven external surfaces also explain K9's absence.

There's a scene when the Doctor rips open the top of a fallen female android. The Doctor's temporary ally, rough-tough Tyssan, is a little shocked, but instead of resulting in criminal proceedings, the incident reveals: robot! It's robot versus robot (see Doctor Who: The Chase (1965) in pod 44 from 2014). Alright, android versus cyborg tanks, if one were to be pedantically accurate. We are nerds after all.

More comedy? The Dalek blinded by a hat placed over it's eye stalk and then the Doctor's hat blown to bits.

The obvious cultural reference, because of the Movellan androids, is Westworld (1973), but Davros is also taken prisoner and frozen in a cryotube. Then the spacecraft takes off, heading for Earth, where Davros is to face justice. Those scenes remind me of Captain Han Solo being frozen in carbomite in The Empire Strikes Back (1980). I almost feel sorry for Darvos; small and pathetic in a little box, waiting to be frozen.

In conclusion, the story was short, to the point, and very topical for the time. It introduced a new companion, featured the most iconic foes, showed horrendous slave labour, posed an interesting question in logic---ably illustrated to a young audience by the Doctor's rock, paper, scissors demonstration---i.e. what would happen in a state of perfect detente/M.A.D.? And then posed the moral dilemma of what one should do in such a situation? I'm not sure the Doctor's solution to the uneasy equation, by breaking the stalemate, was satisfactory, but the status quo was, in any case, about to be upset by the re-introduction of the brilliant and demented Davros. In honour of my last guest, Doctor Mars, just this one time I am doing something I said I'd never do again and assign a score. I award 4 nova devices out of an unobtainable 5 nova devices to this story.

A young David Yip (The Chinese Detective and Indy's short-lived comrade in The Temple of Doom) is a mine slave and Tony Osobo (maniacal Scottish prisoner in Porridge) is a Movellan.

While trapped, the Doctor reads The Origins of the Universe by Oolon Colluphid; a fictional work from The Hitchhiker's Guide to the Galaxy, inserted into the script by the script editor, Douglas Adams. Cheeky bugger.

I watched the extras, this time Prime Computer advertisements (1980) from Australia. It included a mock Tom Baker and Lalla Ward marriage proposal; they were married in 1980. Of their 16 month marriage, she says:

...I loved---and, in many ways, still love---Tom very much. The trouble is, our careers came to be just as important as each other, and we grew apart. I was angry at suggestions that it didn't work because I was too young, or that Tom was unreasonable to me. We just irritated each other occasionally---we weren't close enough...

Two alphas cancelling each other out, I suppose. Oh, and I read that they lived in a flat in Deptford, which is (or rather was) almost in my neck of the woods.