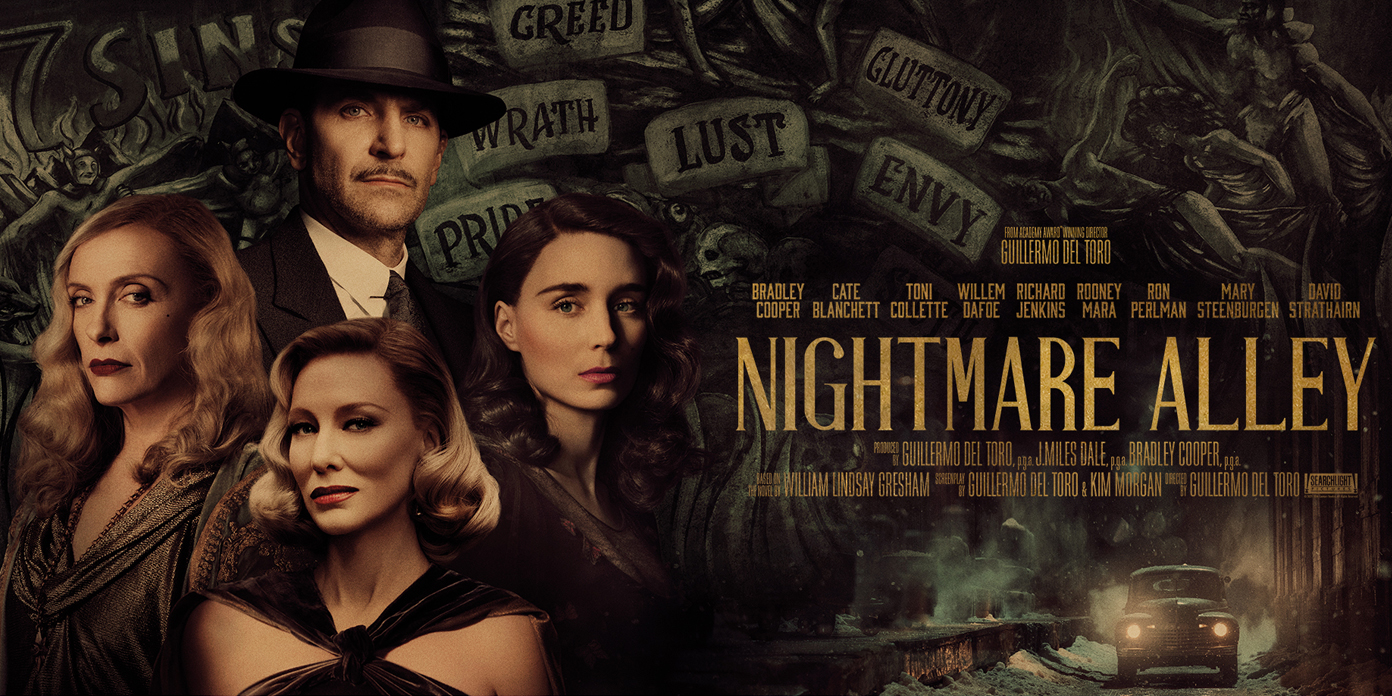 I'm struggling to get these shows out. I won't bore you with the reasons, you know them already, but I'm back and ready to talk up a storm of geek.

In this second adaptation of William Lindsay Gresham's 1946 novel of the same name directed by Guillermo del Toro, Bradley Cooper is a poor man with a traumatic past, who joins a carnival as a roustabout, then becomes a carny himself, shilling for a mentalist act. He eventually leaves, taking the mentalism act on the road, along with the carnival's electric girl, and finds fame and fortune until he runs up against classic femme fatale psychologist played by Cate Blanchett.

I love the underbelly that the grime lives right alongside the glitz. Some of the sets were fantastic, like Cate Blanchett's glorious art deco office. Willem Dafoe played a truly evil character disturbingly well. I was reminded of his Bobby Peru from Wild at Heart, only twice as nasty, if you can believe that. I really do hope that isn't how you recruit a geek (the live chicken eating type, not our type).

The film is beautiful and dark, the cast is stellar and, no doubt, expensive (David Strathairn, Ron Perlman, Willem Dafoe, etc.). Bradley Cooper is an actor I like, but he didn't convince me in the role. And, for a hard-bitten film set in that time period and setting, the dialogue is almost devoid of tough-guy argot.

I love noir, pulp, and horror, and have seen more of it on the screen than most. You'd have thought that a film like this, combining some of my favourite genres couldn't fail, but I couldn't get along with it.

I mentioned this weekly five episode free animation, on the Doctor Who channel on YouTube starting in November, in pod 339 (2020-10-18), but only got around to watching it at the end of last year (2021-12-28). Then, other than tweeting about it, forgot to talk about it until now.

It was part of the Time Lord Victorious multi-format story also consisting of books and audio. This meant you had to buy a lot of stuff from doctorwho.tv to experience the whole story. I didn't. I just watched this little computer animated show.

Time Lord Victorious: Daleks! has those dastardly Daleks are attacking the powerful Mechonoid civilisation from the planet Mechanus (variable spelling: "Mechonoid" vs. "Mechanoid"). They are an entirely artificial species of robot life with, ironically, more emotional depth than the armour encased mutant cyborg Daleks. We first meet them in The Chase (1965), covered in pod 44 back in 2014. They also appeared in the TV Century 21/TV 21 comic books.

Time Lord Victorious: Daleks!, written by James Goss, consisted of The Archive of Islos, The Sentinel of the Fifth Galaxy, Planet of the Mechanoids, The Deadly Ally, and Day of Reckoning. They were roughly just under 14 minutes each and were released as webcasts on the Doctor Who YouTube channel from November to December 2020. James Goss is an author and producer on the periphery of the main TV series, who has worked on Torchwood, for Big Finish, and some other Doctor Who animated renditions of vintage episodes.

Here, the animation art is good, but is very obviously computer generated, and is rather static. Also, as someone who remembers all the crazy acid house and techno graphics of the eighties, it was very trippy looking.

Star Wars Author Tells All About Removed Rey-Finn Romance... by Zack Sharf of IndieWire in 2020 explains the thoroughly obnoxious reason why the obvious burgeoning romance between Rey and Finn was quashed. Author of the tie-ins, Alan Dean Foster says, '...we all know why zero happened with it---and there's no need to go into it in-depth---but that's, sadly, just the way things are.'

How crappy to have that confirmed in print.

Luke Skywalker and Ahsoka Tano are protecting Grogu from attachment, as is the way of the Jedi order. We see this from Ahsoka guilting the Mandalorian/Mando/Din Djarin into not visiting Grogu. Then why does Luke later force Grogu to choose between the Jedi or Mandalorian way? These two young Jedi seem to lack emotional intelligence.

CGI Luke Skywalker was just about flawless, but I do not like the precedent this ongoing trend sets for working actors. While Mark Hamill did the voice acting, in conjunction with Max Lloyd Jones standing in as a body double, I'd rather a real, live, flesh and blood actor in the role. I think it worked well for Han Solo in Solo: A Star Wars Story, so I can't see why it wouldn't work here.

The mysterious gunslinger who shot the marshal? That was bounty hunter, Cad Bane, from Star Wars: The Clone Wars (2008) animated TV series. We can only hope the eternally annoying hick-marshal, Cobb Vanth is dead, but I'm sure he's not.

On a more positive note, what about that amazing ring-world/station? As a fan of hard sci-fi, that was the biggest thing for me in episode 5. It makes me literally salivate in anticipation of the upcoming Amazon adaptation of Larry Niven's Ringworld TV series.

Permit me to re-emphasise how much I don't want Oscar Isaac doing a cockney-ish/London accent in the upcoming Moon Knight TV series?

Oscar Isaac is an excellent actor, who I respect in all his previous roles, but the London accent he is using in the trailer stinks.

The accent is a notoriously difficult to pull off, even for non-Londoner British actors, and usually results in unintentional comedy. (Unless they are actually going for deliberate comedic effect; that I can live with).

A little history: MS-DOS Editor, Programmer's File Editor, MetaPad, and Vim. I have used many other editors, but those I have used most. Of those, I have invested an crazy amount of time in Vim, since 6.x (around the early 2000s) and a few months ago I upgraded from 7.3 (2010) to the latest version 8.2 (2021). Nerds are notoriously conservative.

I also use Notepad2, but find it's propensity to read the contents of my file and decide for itself what the encoding should be monstrously intrusive and a big, nerdy no-no. (Try saving an HTML file containing a UTF-8 meta tag as ANSI. Why? Because I want to). That is a pity as there is something to be said about simpler text editors that don't turn into a lifestyle choice, as does Vim.

(1/ Cult of Vi vs. Church of Emacs. 2/ BTW, puny Emacs, we are winning. 3/ Try searching "vi" or "emacs" in Google. Bloody insulting! 4/ Did you know I once got attacked on XKCD for talking about vi? Talk about cults, that's one right there).

So, every now and again, being a fan of the well-crafted text editor; the Swiss army knife of geekdom, I test the waters of the state text editors. I like to see what's out there.

The answer is nothing, not recently at least. I was hoping to find some nice new multi-platform apps, but no. Instead, I revisited Atom and Brackets---editors I once had high hopes for---and found the former as slow as it ever was and the latter under-featured.

The prodigal son returns to vi.

Does it sound better? I bloody well hope it does, because it's expensive, ginormous, and off-putting staring into the massive cannon.

July the 3rd this year is the official 10th anniversary of this pod. Prepare to paaartay! Party of one? Probably, this is a solo show after all, but who cares?

Wait, what happened to my resolutions?

You tell me. Seriously, I have no idea what I should hope for any more, so you let me know.