CRRRaSh! 435 Doctor Who: The Creature from the Pit 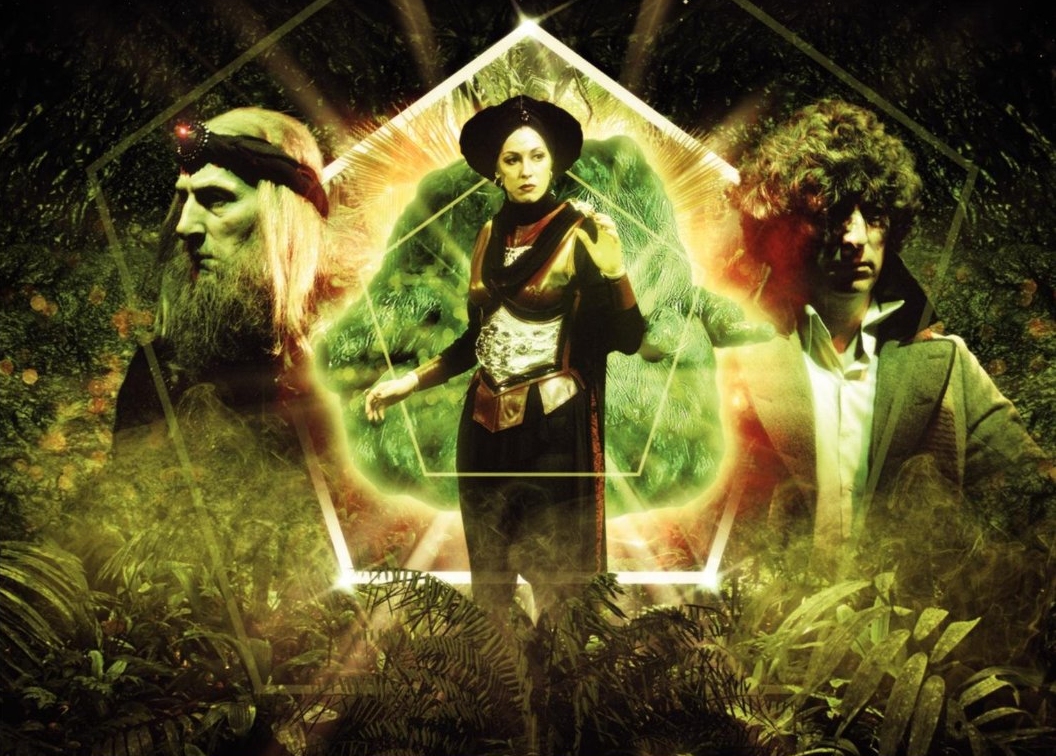 Another thing I forgot to mention last time! Douglas Adams convinced his fellow Cambridge Footlights alumni, John Cleese and actress Eleanor Bron (Help!, Alfie, Bedazzled, Kara in Revelation of the Daleks, etc.), to do an uncredited comedic cameo as a pair of pompous art critics examining the TARDIS at the Louvre. Oh, the irony, Cleese.

Going even further back, to CRRRaSh! 418, John Leeson (the voice of K-9), played a Sons of Earth sympathizer in The Power of Kroll. I only thought of him because his absence for the rest of Season 17.

Tip for podcasters: don't write long essays, write concise show notes, then you won't have to go through this errata and addenda nonsense as often as me.

I tackled garden hedge (J.K. Rowling's sized hedge), shopped, watched this Doctor Who story, wrote up the show notes, then taped back-to-back pods. I'm Exhausted! Booze would have sent me straight to sleep, as would painkillers, so none of that, just pain!

St Vincent and Grenadines became independent of the UK. Today it is a public holiday celebrated as Independence. Where? It's a set of teeny islands off the top middle bit of South America.

We open on a scene of a man being cast, screaming, into a pit.

Romana plugs in a Time Lord distress receiver, the Doctor has discarded as junk, into the TARDIS console a piece of junk. This immediately elicits as an unpleasant sound and sends then hurtling into a jungle on the primitive planet, Chloris.

The Doctor and Roman find a huge egg emitting familiar sounds of distress, but the pair are captured a party and the Huntman's specially bred wolfweeds. The part is attacked by metal bandits who make off with Romana. The party takes the Doctor to their leader, Lady Adrasta, who, through her control of metal production on the metal-poor world, rules the planet. He is tasked with learning about the egg.

Romana tricks the bandits into using a dog whistle, which calls K9, who rescues her. Romana is captured by Lady Adrastra as the Doctor leaps into the pit to investigate.

Within he meets a fraudulent old court astrologer, Organon, cast into the pit (mine workings) by Lady Adrasta earlier. The two meet the creature, a fleshy, globular creature; a consumer of chlorophyll and excreter of metals. They have difficulty communicating as the creature has no visible sensory organs, though it used a protrusion to draw the shield from Lady Adrasta's throne room. Meanwhile Lady Adrasta and her people come after him.

The shield, a communication device, is brought forth by the bandits under it's control, following their looting of the palace, and attached to the creature. Speaking through the Doctor, the creature says it is Tythonian Ambassador Erato, on a mission to trade metal for chlorophyll. The egg is its spaceship. He was imprisoned in the pit so that Lady Adrasta could retain her sole control of metal. The Huntsman looses the wolfweeds and Erato squashes her.

Tythonus, angered over the loss of Erato, have sent a neutron star to crash into Chloris's sun. Erato agrees to engulf the neutron star with aluminium, so that the TARDIS can use a gravity beam to fling it into space.

The Huntsman is left in charge. Chloris can look forward to a bright future and peaceful trade with the Tythonians.

Myra Frances (Anne Tranter in Terry Nation's Survivors (1975) is delightlyfully evil and sexy as Lady Adrasta. She's a sort of female Russian oligarch. Her metal wealth ostentatiously diplayed in her blingy attire and jewellery, and literally painted on (or at least around) her face.

The Huntsman and wolfweed handler (David Telfer) reminded me immediately of Starbuck from Joan D. Vinge's The Snow Lady, which immediately made me associate Lady Adrasta with the Snow Queen Arienrhod.

The creature's bulbous fleshiness and questing pseudopodia had me laughing. The creature, Ambassador Erato, reminded me of Horta from Star Trek: The Devil in the Dark (1967).

I'm not a fan of Romana 2 played by Lalla Ward. She seems like a weak character. Nothing against Lalla Ward, but it takes an extraordinary force of personality to play opposite Tom Baker and, unfortunately for her, the audience was spoiled with Louise Jameson's Leela and Mary Tamm's Romanana 1, both of whom were a hard act to follow. According to an article at tardis.fandom.com (citing to Doctor Who Magazine Special Edition), Mary Tamm suggested Lalla Ward as a successor.

The scene when Laday Adastra is squashed. Ever play bundle in school?

One of those hairy bandits actually understood the economic value of scarcity.

I can't help comparing the Doctor pondering that vast number of odds against success in preventing the disaster was his lucky number, to the odds against Arthur and Ford getting picked up by the HHGTTG's Heart of Gold drive from HHGTTG; a number that equally improbably was also a phone number. Tenuous, I know, but Douglas Adams was the script editor. Did he suggest that, or slip it in? He had form, so I wouldn't put it past him.

I have since learned that Erato's comedic fleshy suggestiveness had a similar effect on the crew that it did on me.

So much so, that they had to change the design by adding pincers to the end of the offending protuberant, probing proboscis.

I think that only made it worse.