CRRRRS 438 Doctor Who: The Horns of Nimon 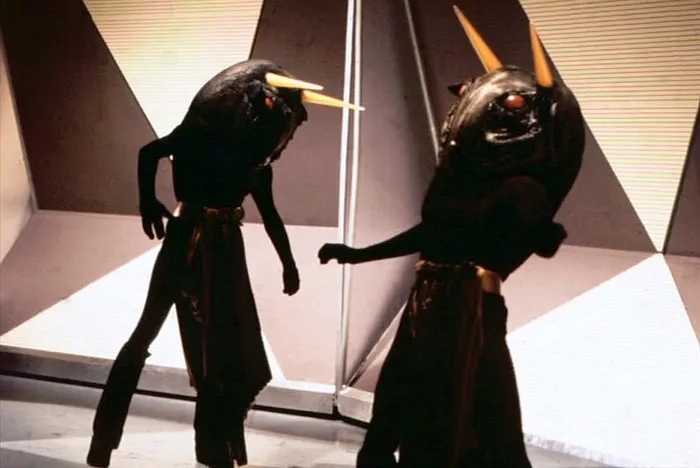 Why? Because I have tendency to ramble and I'm hoping this will force me to be more concise.

Expect Journal is appear in the non-Who pods too.

On this Day in the UK replaced with Zeitgeist because it sounds cooler, and I'm yet again tired of only talking about our little island.

I mean, it's bad enough limiting this to This Island Earth. Consider the whole. I mean we are talking about the entirety of space and time!

Actually, I intend to include a Zeitgeist with all retro revisits (inc. books, comics, etc.) from now on, if, of course, I remember.

For my first entry, I have nothing of any great import happening on our isle, but further afield science fiction author Kurt Vonnegut got married... and so it goes.

An ailing spaceship of the Skonnan Empire, piloted by two arguing soldiers, is carrying sacrificial teenagers from the planet Aneth, when it breaks down near a black hole.

The Doctor, modifying the conceptual geometer in the TARDIS console, has immobilised the TARDIS, when they begin falling into the black hole, but crash into the ship. The Doctor extrudes the TARDIS's defence shield into a conduit. They enter the ship and find teenagers, as well as hymetusite crystals on board.

The Doctor and Romana are captured by the one surviving soldier, who has appeared to have murdered his partner. They agree to save the ship using the hymetusite. The Doctor, on the TARDIS for supplies, is seperated from Romana when the engines start, so he follows them.

The ship arrives on Skonnos and Romana and the teenagers, take the hymetusite into the labyrinthine power complex. It is the domain of the Nimon, a creature with great knowledge, who has promised the ruler, the mad-scientist, Soldeed, the technological means to lead his once powerful people to the re-conquest of the galaxy in return for sacrificial victims and hymetusite.

Inside the power complex, the shifting structure drive Romana and the teenagers further in. They find dried corpse of previous sacrifices drained of life-force, and finally the Nimon.

The Doctor arrives, enters the maze, and rescues Romana and two of the teenagers.

The Nimon is building a link between black holes through which to transport his people in egg-shaped capsules. Far from helping Skonnos, we find out that what the Nimon frequently refers to as, "the great journey of life", is the way his people, travel via their black hole system from planet to planet, draining their resources, using the same ploy of appealing to greedy leaders. They are now leaving the last planet they conquered, Crinoth, and invading Skonnos.

Romana learns some of the Nimon's strategy when she accidentally travels to Crinoth in one of the travel pods and meets Sezom, who was once the ruler. He gives her jacenite crystal, which can stun the Nimons, once fitted to a force staff. With the Doctor's help, Romana's pod returns to Skonnos.

The leader of the teenagers, Seth, is armed with Soldeed's staff, fits the jacenite according to Romana's shouted instructions, and stuns the Nimons.

K9 shoots the last Nimon and Seth shoots Soldeed, but sets off a self-destruct system. They escape labyrinth. and Power Complex explodes.

From the TARDIS view screen, the Doctor and Romana watch Seth and his companions returning to Aneth and see Crinoth destroyed.

In The Horns of Nimon, a fascistic imperium is ruled by an evil mad scientist in league with a children eating monster. If Doctor Who wanted to one-up the Star Wars franchise, at least in story weirdness not budgets, then this would be it.

Wardrobe and makeup for Soldeed seems impossibly to have traversed time and taken design cues from Merlin in Excalibur (1980). He has the beard, headgear; though a circlet not a skull-cap, long dark flowing robes, and a wizardy staff, and a dash of Ming the Merciless thrown in for good measure. I thought perhaps that Excalibur's costumier, Bob Ringwood, had been involved in this story, but no. Is there a link I don't know about? Let me know.

Mention should also be made of Soldeed's right hand man, Sorak's splendid plumed black helm and tunic with accordion sleeves.

K9 proves himself once again to be a walking encyclopedia, when the Doctor asks him about Skonnos.

In episode one, the Doctor offers Romana his sonic screwdriver to start the conversion of the spaceship engines to run on hymetusite, in a callback to Nightmare in Eden, when Romana says she needs a screwdriver to fix the Continuous Event Transmuter. However, Romana has made her own. It is slimmer than the Doctor's and he almost swaps it for his own device when handing it back. Cheeky bugger.

I found it amusing that the Doctor could divert the bull-like Nimons fire with a flash of red cloth.

I liked the Nimons' horns used as energy weapons and, a structure of the same shape, though on a vast scale, should comprise an integral part of the power complex.

I enjoyed the idea of multiple fascistic cultures destroyed through their own lust for power.

I did not appreciate poor old K9 being dismantled and manhandled. As the rewatch has gone on, I've lost my adult animosity and regained my affection for the little robot dog.

This entire story is inspired by the Greek myth, especially that of Theseus and the Minotaur. But there's also Soldeed, the mad scientist/high priest/emperor, eager to sacrifice children. This is very reminiscent of Agamemnon sacrificing his daughter, Iphigenia, when their fleet is becalmed at Aulis. Skonnos itself sounds Greek too. The Doctor marks his progress through the labyrinth with star stickers, like Ariadne's trail of string. (The Doctor also says in The Creature from the Pit that he gave Theseus and Ariadne a ball of string). Then there's the Doctor saying that he's glad he remembered to paint the ship returning to Aneth (a near anagram of Athens) white this time. He's again saying he was involved in Theseus's quest, in which the crew of the triumphant returning ship, after Theseus slew the Minotaur, forgot to change the black sail to white; indicating their victory, which subsequently led his father, King Aegeus to commit suicide. Oh, those bitter ending Greek myths.

What's odd was that he, along with two other notable Doctor Who actors, David Troughton (Patrick Troughton's son; King Peladon in The Curse of Peladon (1972) (pod 271)) and Peter Davison (the fifth Doctor), starred in the strange 80s black comedy, A Very Peculiar Practice. I'll be honest, I watched it partly/mainly (?) because of the incredibly sexy and vampy, Dr Rose Marie, played by Barbara Flynn.