CRRRRS 461 Doctor Who: The Power of the Doctor 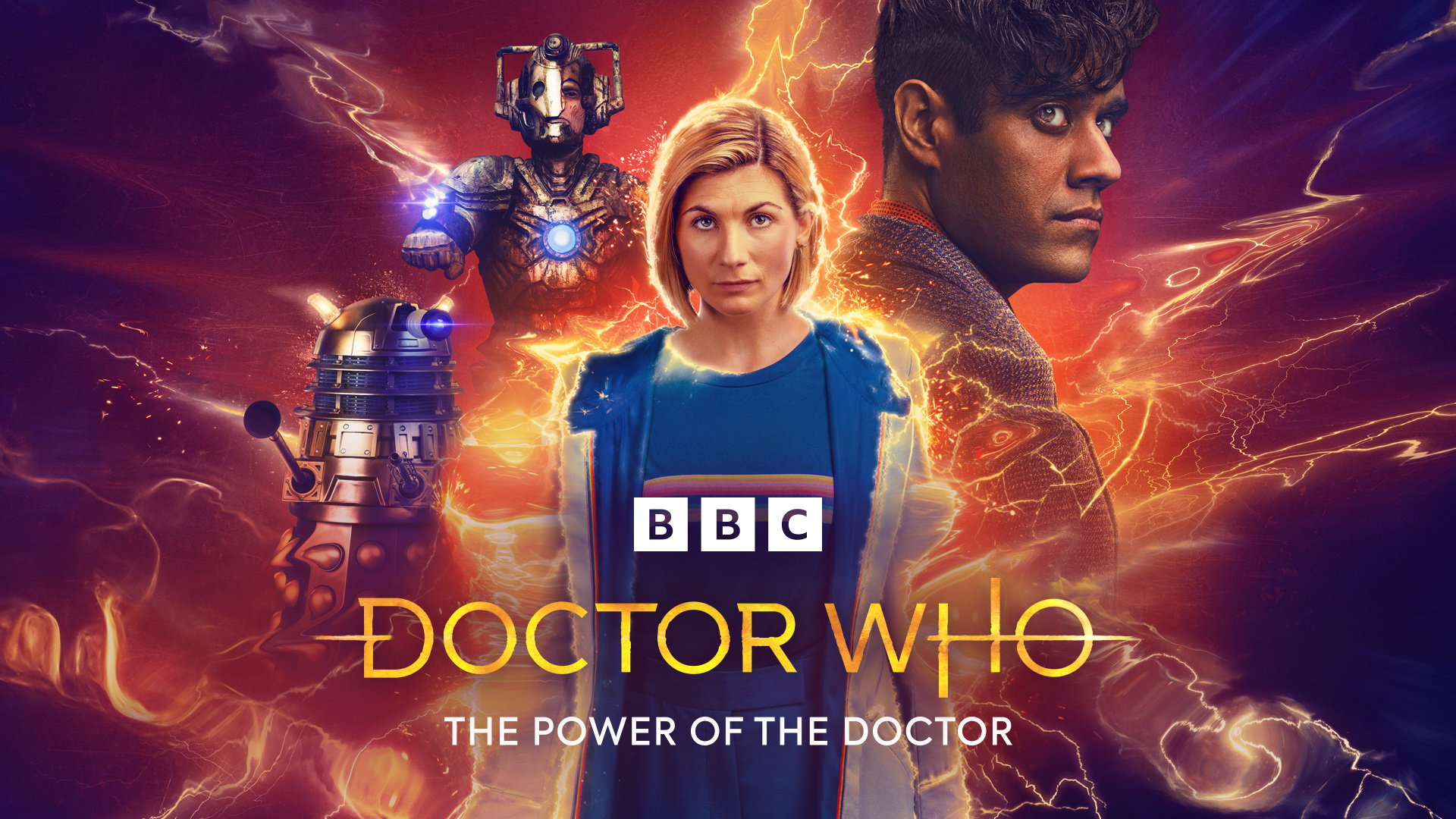 It was Divali last Monday and we did the usual Divali things, like preventing Dad from setting fire to himself or the house, making and eating too many cakes, bickering like goblins, and regarding our neighbour's lights, fireworks, and friends with jealousy. Miraculously, all family hatchets were buried and we wished each other a happy Divali before retiring to our respective rooms.

An thus, I declare a happy Divali to one and all. Next, Halloween and pumpkin pies, then Christmas. It all seems to be flying by.

I've invented a new word to describe how I felt with the current technical issues: "faffasco".

Money has been spent, equipment is trickling in, but in the meantime I'm taping on a recorder.

In short, I was beset by technical problems. My headphones broke and my new PC's analogue sound output is low quality. Before, I was spoilt by excellent sound on an old Beats netbook and my Mac Mini. Now that I have entered the world of bog standard PCs, things are not so rosy. Lots of quids later, stuffing is arriving at Castle Royenstein.

Diabolik, that's how I came up with that.

The tics are spiking lately. Arthritis too (anthropomorphise as an elderly knight in rusting armour, who I call Sir Arthur Itis---because of my slight dyslexic mistranslation of arthritis until my 20s---and Sir Clanky, his horse).

I also managed to catch a couple of colds. How that is even possible given my Covid induced germophobic paranoia? Thank the gods of Bal Sagoth, I was boostered for Covid last Tuesday and flu last Wednesday, but I'm also paying for that with rather nasty reactions. Still vax reactions are better than death.

Like buses, the past few weeks were also heavily peppered with more migraines after the last bout. By the time you are reading or listening to this, I'll have had some more.

I Still Want to Be Happy

The world isn't great now and neither am I, hence many recent deletions on Twitter and redacting tons from my shownotes because this show, I keep telling myself, is a refuge from woes.

What? You thought those earlier moans were rough? You have no idea how much stuff---mainly political---got dumped. I have been killing my darlings quite ruthlessly.

I'm also jettisoning the technology section from the podcast. It's tough enough covering SFFH, so the kitchen sink approach I adopted since the beginning is out. 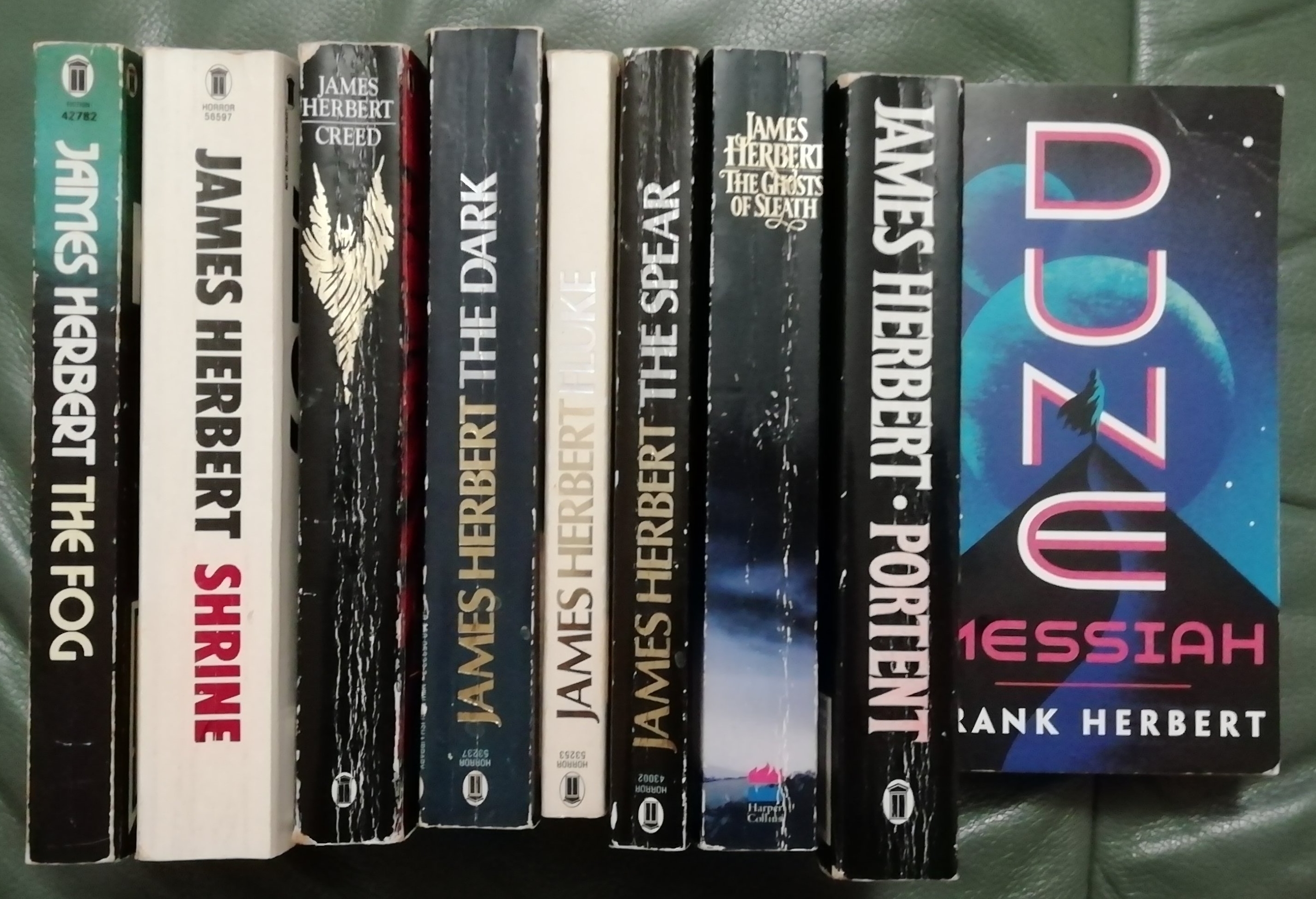 Ex Libris Roy will be restored!

On Saturday, I went into a local charity shop and bought a big stack of Herbert sherbet I'd spotted the afternoon before.

Despite a depressingly familiar shopping while brown/shopping while black incident, I did not throw a wobbly, which the occurrence morally merited, but bought James Herbert's The Fog, Fluke, The Spear, The Dark, Shrine, Creed, Portent, and The Ghosts of Sleath, and Frank Herbert's Dune Messsiah. When I was finished, the shop was Herbertless. Herbert! Herbert! Herbert! (Star Trek: The Way to Eden).

Ah, the treasures of my mostly NEL haul! Apparently, New English Library was formed in 1961 when Times Mirror, L.A. bought the UK's Ace and Four Square, before later becoming an imprint of Hodder Headline. As well as serving up Harold Robbins' pervy pulp and James Moffat's cult crud, the line included authors like the Herberts (though the aforementioned Dune Messiah was a later print from Penguin Random House), Brian Aldiss, Robert A. Heinlein, Michael Moorcock, and Christopher Priest, etc. All are authors whose work has featured in this pod in the past and will no doubt be discussed in the future.

The Lord of the Rings: The Rings of Power

In the season finale, why couldn't the as yet unnamed Istari save Harfoot Sadoc Burrows (Lenny Henry)?

Also, now that we know the wizard isn't Sauron, I hope he isn't the oh-so-predictable Gandalf. Let's see free will, as well as nature versus nurture in action. That is, maybe he is Saruman, who was once good.

I also want to take the opportunity to congratulate Puerto Rican actor Ismael Cruz Cordova, who plays Arondir, for having a very elfin face, even without the ears. Frankly, I think he's the most elf-like actor on the show.

There was very little action in episode 7 and 8, but it was absolutely lovely seeing parts of the Star Wars universe we hardly ever see.

I think Corusant looks like a slightly less crappy CGI'd Croydon. Niamos's beach resort looked like a brutalist beach slapped down in Namibia, but is actually Cleveleys, Lancashire. I'm guessing, only half facetiously, the hellish prison manufactory is modelled on a Tesla Gigafactory plonked in the middle of the sea. Well done, location scouts.

Doctor Who: The Power of the Doctor

This is Chris Chibnall's and Jodie Whittaker's last story. Written by Chibnall, this is the third and final 2022 Jodie Whittaker specials, It was broadcast on Sunday and I watched it on Monday. After this story, Ncuti Gatwa (finally, I get the pronunciation right) will take over as the Doctor sometime next year. Teaser footage of his debut has already been released, I believe, and I have no intention at all of watching it, or any other teasers, trailers, behind-the-scenes looks, and blah, blah, whatever. I want my excitement unadulterated.

In The Power of the Doctor, The Doctor, Yaz, and Dan drive off a Cyber Master heist on a space train, though the Cyber Masters get away with their prize; what appears to be a young child. Afterwards, Dan leaves, a renegade Dalek offers the Doctor information, Kate Stewart's UNIT, now including Ace and Tegan, tell her famous paintings have had the Master's face added to them, and some seismologists have gone missing.

The Doctor confronts the Master and learns his Cyber Masters, together with the Daleks, are using a Qurunx; a being of sentient energy (the child captured on the train) to burn Earth using volcanoes. The renegade Dalek, turns out to be an unwitting trap, and the Doctor is captured.

The Master is captured by UNIT, but had previously sent a shrunk Cyber Man to Tegan, who thought it was a peculiar present from the Doctor. It regrows, opens up, Cybermen exit, attack UNIT and rescue the Master.

Meanwhile, the Daleks take the Doctor back to 1916, where the Master has assumed the role of Rasputin; his innate hypnotic power holding sway over Tsar Nicholas II. He performs a forced regeneration and she regenerates into him.

During this time, the Doctor's consciousness meets previous incarnations, in an imaginary wasteland. They tell her that with help, she could reverse the forced regeneration.

The Doctor had previously created an AI-driven holographic projection of several of her previous incarnations. It helps Ace find Graham and destroy the volcano device and Tegan to destroy the Cyber converter at UNIT before Kate can be made into one of them. Yaz and Vinder capture the Master and the forced regeneration is reversed. Later, just as the Doctor is about to leave in her TARDIS, after having freed Qurunx, the Master diverts its energy beam and injures her severely enough to start her regeneration.

The Doctor takes returns Yaz to Earth, where she joins a support group of companions: Graham, Dan, Ace, Tegan, Ian, Jo, and Mel. Kate is there too, to recruit ex-companions for UNIT.

Alone, the Doctor regenerates back into the tenth incarnation.

Let's get this over with: the Master ra ra Rasputining to Boney M's disco hit Rasputin, the mad science, the flashing lights, etc. Yes. Oh, yes! Did you write that just for me, Chris Chibnall? Did you? Probably not, but it felt like it. Disco and arch villainy is a match made in groove heaven. I think Sacha Dhawan could have gone more camp, but I loved the scene almost as much as Eddie Izzard's Tony Pompadour and Geoffrey Rush's Casanova Frankenstein scene from Mystery Men.

Talking of style, I never warmed to Jodie Whittaker's Mork and Mindy kid friendly outfit, but I did like her hair; distinguishing her from her breakout character in Attack the Block, her predilection for welding goggles; the tinkerer in me loves those, and the ominous throbbing variation of her Doctor Who theme music, which never failed to impress me.

Lore-breaker! The Master's shrink gun works both ways? We were told in Old Who that it kills it's victims.

Forced regeneration? What exactly did that achieve? It was the usual supervillain mistake of an over-elaborate overly clever plan and savouring the moment of your enemy's destruction, instead of the more prudent kill first, party later method.

All those faces from both Old and New Who! The Doctors: First (David Bradley standing in for William Hartnell), Fifth (Peter Davison), Sixth (Colin Baker), Seventh (Sylvester McCoy), Eighth (Paul McGann), Tenth (David Tennant), and Fugitive Doctor (Jo Martin). The Companions: Yaz, Graham, Dan, Ace, Tegan, Ian, Jo, and Mel. Damn it, if they could have got Leela, then they would have had two of my favourites: Ace and Leela. I particularly appreciated Ace donning the iconic flight jacket, parachuting off a building, whacking and exploding Daleks with her baseball bat and souped up Nitro-9. Again, like the disco scene, this adventure made it feel like it was for me; an Old Who podcaster.

There was so much fanservice, but it was not at all a detriment to the story, and I went into total nerd overload. This is the kind of episode, had it not been for the pandemic, I would have loved to watch as part of an audience of fellow Whovians, all grinning ear-to-ear, as if in the midst of a simultaneous seizure. Or, judging by the people starring at me at Eastercon years ago, that might just be me. This was spectacular! So much going on, non-stop action, and beloved characters from the past. Of course, I am going to watch this one again.

While perusing iPlayer, I noticed two brilliant cult horror films definitely worth a watch if you haven't seen them already.